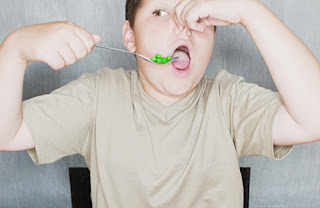 When Adam was born he had a hard time eating. We tried breastfeeding, but he wouldn’t latch on even with the help of the nurses and the lactation consultant. In those first 24 hours he wouldn’t eat at all. The nurses worked with him and finally got him to eat starting with a little dropper, and then using preemie bottles. When we left the hospital they put on his discharge papers: “Failure to get hungry.” In those months that passed after he was born, it took a LOT of work getting Adam to take his bottle. He struggled with it for several months and then he got used to it and things were better on the eating front.

Around 4 months we started feeding him rice cereal. He seemed to love  it! Then around 6 months, we started on the stage 2 baby food jars. He did great and he loved all his veggies! When it became time to start on fruits (the doctor had us wait until he had tried all the veggies first), he would not eat them. He gagged and shuttered. We tried mashed fruits, jarred fruits, fruits mixed with rice cereal and oatmeal, and we tried every flavor out there! Soon after, he started refusing his rice cereal and oatmeal too. I figured he just really liked his vegetables, I wasn’t going to force him to eat, so he started eating the stage two jarred veggies for breakfast, lunch, and dinner.

Adam also loved crackers. He would eat crackers, cheerios, baby puffs, and chips. If it was crunchy and cracker-like he most likely would like it. We tried other foods, but he just wasn’t interested. I figured it would just come. I watched all the other moms feeding their kids all kinds of foods, and I was sad that Adam wasn’t interested. It got to be frustrating feeding him the same foods every day, but I continued hoping everything would eventually change.

Around 9 months we started trying the stage 3 jarred baby foods. He liked the the smooth parts, but the chunks of food he would spit out, gag, or choke on. Also around this time, I started getting worried about his weight. He had always been on the lower end of the scale, but nothing too bad. Around 6 months and up we started noticing he was not gaining enough weight. His pediatrician wasn’t concerned at first, he said it would eventually start going back up, but it never did. Adam does gain weight, but it is very slow. He has been under the 10th percentile for weight since the beginning of this year.

We continued to keep trying foods, and Adam opened up to a few new choices. He would eat watermelon, granola bars, yogurt, and chicken nuggets at times and other times not so much. We were still feeding him stage 2 baby food every day for breakfast, lunch, and dinner. It hurt me so much, because it seemed impossible that baby food could be filling him up enough at this age. People kept telling me it was normal, he was just a picky eater, but it was more than that. I knew it in my heart.

At 12 months I kept expecting everything to change. Now he will eat more, I thought. But it was about the same. At his 12 month appointment I discussed it with his pediatrician, and said he wanted Adam to get checked for a food/texture aversion. The doctor said he was a healthy boy, but this was something we needed to get checked out. He explained what it was and I did some research on it and things started falling into place. I realized a lot of the behaviors I had been seeing were definitely symptoms of this aversion. The choking and gagging, only eating foods that had certain textures, and him being very texture oriented, (he was afraid of grass and sand, and had to feel certain textures on his lips like food, and clothing).

One day we were out for lunch, and I was trying to feed Adam his stage 2 baby food. A lady and her two children sat by us and watched me. She asked me how old he was and I told her 13 months. I could tell she was looking at me weird. Several minutes later, she asked me again how old he was. I told her the same, and we chatted for a minute or two. I finished up feeding Adam and watched as her kids ate a kid’s meal. Before we left, she asked me a third time how old my son was. I knew by this time she thought I was crazy. I knew Adam was not supposed to be eating baby food. She knew it too. But what was I supposed to do when he would eat nothing else?

We had his evaluation several weeks ago and I got the results back today. He has a feeding disorder that is caused by decreased sensory and motor skills. They also tested him in his sensory processing skills and found that he is in need of occupational therapy as well. They told me that because of these issues, it is probable that Adam will also need speech therapy. He is 15 months and does not say any words at all right now.

During is evaluation, they found he has decreased muscle tone in his cheeks and face which makes it a little harder for him then most to eat. He scored very low on tactile, taste and smell, movement, and visual and auditory sensitivity. Because of some of these problems, he doesn’t have very good balance. In his evaluation they said, “…he was observed to overstuff his mouth with crackers and to frequently use his fingers to hold food in place while chewing. He exhibited an immature up/down munch chewing pattern with soft solids tolerated. These behaviors are suggestive of a sensory deficit; as well as abnormal oral motor skills characterized by decreased strength. Results of today’s assessment revealed Adam exhibits a significant oral motor/feeding disorder characterized by decreased oral intake of solids, disorganized feeding skills, impaired oral motor skills, decreased self-feeding/drinking skills and oral defensiveness.”

I do not love my baby any less, in fact this just makes me want to love on him more because I know he needs it. He may have a hard time eating and doing other things, but he is still the happy baby I know. Right now our therapy sessions are once a week for the next 6 months. We are waiting on a referral for the occupational therapy and they are going to watch to see if he starts improving in speech and starts talking at all. If not, then we will start speech therapy as well.

If I could be honest and say I am so relieved to finally have everything figured out and be getting some help. To know why he was the way he was as a baby, why he didn’t want to eat, why he couldn’t latch on to breastfeed, it’s just a relief to have some answers. I am so thankful we have good insurance that can pay for all of this. I know there is no way we could do it otherwise.

I am a little overwhelmed at all this coming at me right before my husband deploys. I know that this is going to take a lot of work and especially a lot of work at home working on the things he has learned in therapy. I know it will be worth it and I am so glad we were able to catch this now then a year or two from now. I know that when his daddy gets back, this little boy is going to be so different and so grown up!