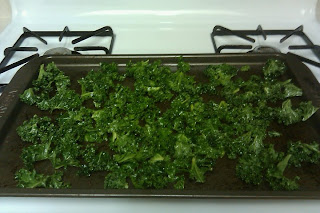 This past weekend I decided to finally make kale chips. I purposely waited to do it while Jon is gone because I know he does not like anything healthy. Although, that does not mean he has escaped his fate of trying Kale because I think Kale is going to be something I buy a lot more often!

I was first introduced to kale chips through my friend Natalie. She brought them over to a play date I had at my house with several other military moms and their babies. When I saw them, I couldn’t imagine what is was, but I always try everything at least once, and I was very surprised at how it tasted. It was yummy! They were crunchy and salty and didn’t taste at all how they looked.

When a mutual friend of ours posted a recipe to kale on her blog, I realized how easy it was and had to make it! So what is kale? I have had a lot of people ask me questions about it, so here is a little about kale.

“Kale or borecole is a form of cabbage (Brassica oleracea Acephala Group), green or purple, in which the central leaves do not form a head. It is considered to be closer to wild cabbage than most domesticated forms. The species Brassica oleracea contains a wide array of vegetables including broccoli, cauliflower, collard greens, and brussels sprouts. The cultivar group Acephala also includes spring greens and collard greens, which are extremely similar genetically.” –Wikipedia

Kale also has a lot of nutritional value, so for those of you who are healthy eaters you are going to love this!

“Kale is considered to be a highly nutritious vegetable with powerful antioxidant properties; kale is considered to be anti-inflammatory.Kale is very high in beta carotene, vitamin K, vitamin C, lutein, zeaxanthin, and reasonably rich in calcium. Kale, as with broccoli and other brassicas, containssulforaphane (particularly when chopped or minced), a chemical believed to have potent anti-cancer properties. Boiling decreases the level of the anti-cancer compounds; however, steaming, microwaving, or stir frying do not result in significant loss. Along with other brassica vegetables, kale is also a source of indole-3-carbinol, a chemical which boosts DNA repair in cells and appears to block the growth of cancer cells.Kale is also a good source of carotenoids.” -Wikipedia

Fun Facts about Kale:
While I was making the kale I discovered several things…

1. Kale smells!
I opened the bag and poured some out so I could wash it. While I let it air dry for a few minutes, I kept thinking to myself, What is that smell? I took a whiff of what was left in the bag and was surprised to find that, indeed it was the kale that smelled!

2. Kale shrinks!
When I took the kale out of the oven I was surprised and a little disappointed by how small they had gotten. But I promise it does not take away from the taste!

3. Kale crackles and pops!
While I was letting the kale bake, I decided to clean up the mess I had made. Halfway through the cooking time, I heard small crackling and popping sounds. I could hear it cook! It reminded me a little of rice crispies after you put the milk in the bowl. Lots of fun!

So now without further ado, here is the recipe you have all been waiting for. I promise you it is super easy. Probably the easiest recipe you will ever make!

How to Make:
1. Preheat oven to 350 degrees.
2. In a bowl, drizzle or spray olive oil over kale. (You want the kale covered with oil, but not drenched or saturated.)
3. Sprinkle and mix with salt and pepper (to taste).
4. Place kale on baking sheets, spread out, trying not to overlap too many pieces.
5. Bake 10-12 minutes until crisp.

My Thoughts:
A lot of this is going to be how YOU personally like it. There is no measuring. You may have to make it several times before you find out how much salt you want to use. I will say though, use a lot, more is better!

Recipe From:
The Tale of Two Kitchens

To view more recipes on Singing Through the Rain, see my recipe list!