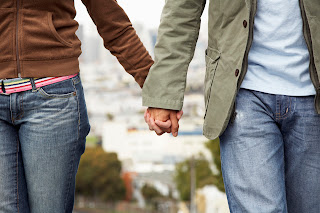 A lot of people talk about finding “the one”. Finding that one person that they can spend the rest of their life with, someone they will love and cherish and that will love and cherish them as well. Some people don’t believe in finding “the one”. They don’t think there is any one person out there that is meant for them. What do I believe? I believe, before I was born God knew exactly who I would be with. He knew my personality, and He knew exactly who to create to be my partner through life. Finding that person is the hard part. I have been asked by a lot of people over the years how I knew my husband was “the one”.  And I thought I would share my story with you.

Jon and I didn’t have that fairytale beginning, I did not like him from the start. There is a lot more to the story of how we met, and you can read more about it here, but I am going to rewind back a little bit. Before college, I was always the shy girl. Quiet, and pretty much afraid of boys, at least talking to them. I had maybe one or two guys like me, but never had a boyfriend, which at the time I was sad about. I look back now and am grateful for that. I did not have to go through all the hurt of wading through boyfriends to get to the one gemstone I ended up marrying.

In college, it seemed all my friends had boyfriends or someone who they were interested in, and I was sad because I had no one. I was shy and quiet, but yet I still hoped that some boy would make the first move in being friends with me and it turning into something more. I remember one night I prayed about it to God. My roommates were all out of the room and I had just started thinking about everything. I told God how I felt, and I even thought about the exact kind of guy I was looking for. Tall (at least a head taller), outgoing (since I was shy), and more!

Again, I will not tell you how we met, that is a story you can read here, but it was crazy how God brought us together, and I started to realize that Jon was all those things I had told God I wanted in a guy! While we were in the “just friends” stage, we both knew we wanted more and we talked about it before we went ahead and started dating. To me, I did not want to just “date around” I wanted to be with him with the intent that we were going to be seeking God to find out if we were the ones God intended for us to marry. We both decided that if at anytime we felt that we were not the ones God intended for us to marry that we would break it off.

Another thing that we did that I liked, is Jon asked my mother’s permission to date me. Believe it or not, your parents know you best, and they have good perception about the people you date. Granted, we were at college so my mom was not able to meet him until later, but just asking her permission shows that we wanted to honor our parents in getting their opinion, and that we cared what they thought of our relationship.

We got together officially in October 2005, but in March of 2006 I broke it off. I will not get into the details of what happened, as there were many factors that played into it, including friend’s opinions, pressure, and stress. But I remember that night, tears pouring down my face wondering if this was the right decision or not. I had been praying about it for awhile asking God to show me some sign. And I believed it was the right thing to do. The next day, I remember waking up and immediately everything that had happened the night before hit me like a ton of bricks. I knew in that moment, I loved him. I was heart-broken. I remember sobbing in the shower, and not even being able to finish. My suite mate from the next room heard me and came in to give me a hug. I didn’t go to classes that day, because I just needed time to think, plus I wanted to avoid seeing Jon as much as possible for the moment.

Jon, on the other hand, was totally shocked. He did not understand what had happened and wanted to fix it as much as possible. I just drew away and I told him I needed space. I need my time to think. I used that time to pray, think about what happened, think about the future, pray some more, and I even read a book that helped me a lot, called “Boy Meets Girl“. 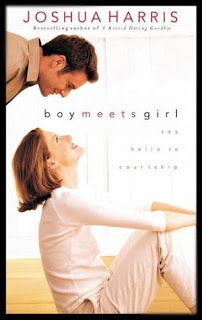 During that time apart we both matured. We both took time apart to get closer to God, and even though it was one of the worst time’s in our lives, it ended up being the best as well, because it brought us back together. I look back and I am so thankful for that time apart. Time to get refocused, to get our priorities straight, and to mature. Two months later, we started talking again. It was the end of the semester at college, and we were both about to go home, miles apart. We decided that over the summer we would pray about everything and then see where it brought us. Later on, when I got on the plane to go home, I was so confused. Here are a few excerpts from my diary.

“I am sitting in the airplane on the way to Boston and I am watching the rain fall outside. I just talked to Bethany on the phone and I started crying. Today, no this whole week as been rough. I started talking to Jon on the phone, I think it was Monday. It’s hard because it just brings everything back, and makes me more confused.”
I went on to talk about the rough day I had for awhile.
“On top of it all, all I can think about is Jon. I want to call and just talk and all the while I keep thinking, is he thinking about me?”
Then I wrote out a prayer.
“Lord, I am so confused. Right now I feel that I love him. Am I wrong or right, or is it just because I’m lonely? I don’t know, just please help me sort out all my feelings, fears,and doubts. Lord, I love you and I do want this summer to be about you. Please help me to find ways to serve you and be a blessing to others. I love you Lord, give me peace and give mom the right words to lead, guide, and encourage when I tell her everything. In your precious name Amen.”
That night, when I got home from the airport, I decided to call him to tell him I got home safely. The next day he did the same. From that day, we started talking a lot more on the phone. We discussed things that had happened, why we broke up, and what we did wrong. It felt good to get everything out and just be us again.

One day, I met my mom for lunch near her work. We wanted to catch up on everything that had happened while I had been gone, and I wanted to tell her what had happened with Jon and I. I wanted her opinion. It was so important to me. I told her the whole story and and was surprised by some of the advice she gave me. She even thought we should get back together if that was what I wanted. Jon and I talked some more and we decided that we would both pray about it and ask our parents to pray about it, and if they all felt that is was ok, and this was God’s will we would get back together.

I didn’t want to rush things, and I wanted to make sure beyond a shadow of a doubt this was God’s will. I knew if we got back together again it would be forever (and it was!). So we all took a week and prayed about it, at the end of the week we both talked to our parents and got the ok, and two months later, May 2006 we were back together.

The story did not end there however. After we got engaged and only a few weeks before we got married, we had pre-marital counseling with our pastor who was going to marry us. I remember him asking us if either of us had cold feet. He said if we do that is something we needed to deal with. He said if we had any doubts about marrying then we needed to call off the wedding right now. Because if it was God’s will we would have real peace, and no doubts. And I remember that being so true. I didn’t even need to second guess myself or the wedding, I was absolutely sure from the bottom of my heart, that Jon was the man I was supposed to marry and the one God had for me. I had found “the one.”

Here some steps I suggest:

1. Prayer.
Tell God exactly the kind of person you are looking for. Ask him to be the center of your relationship and always seek to put Him first. Ask God to give you a strong love for this person, if it is meant to be, and to take away any feelings you might have if this is not who God intends for you to be with.

2. Discuss your relationship.
What are the rules? What is the purpose in both of you being together? Is it for marriage or something else?

3. Ask parents’ permission.
Your parents know you better than anyone else, and they know the type of person that would suit you.

4.  Talk with people you trust.
Get their view on the relationship. Especially if you are not sure about things. Sometimes people see things that we would never have seen because we are blind to the truth, or because we do not want to see them.

5. Go to Pre-marital counseling.
I know you may think it is silly, but I tell you this is a great thing to do before marriage. It is only a few sessions and you will be glad you took the time to discuss the things mentioned during these sessions.

One last thing I wanted to mention, is that both Jon and I were virgins until the day we were married. Today, in our society and even among Christians this is unheard of and even frowned upon. I want to say that is was THE BEST decision I have ever made, and I think helped our relationship a lot. I am not going to lie and say it was easy. Because it was probably the hardest thing I have ever done, but it is worth it. I am not saying, that if you did not remain a virgin before marriage that you will have a bad relationship, or that you will not find the one for you. I believe you still can and will. But this is a huge area in a relationship, and if you do the right thing God will honor that.

Thanks for reading my story, and I hope that this is a help and encouragement to someone somewhere!