Since Valentine’s Day is coming up, I thought it would be fun to tell how my husband and I met and fall in love – our love story. Everyone likes a good love story right? Well maybe not… but I am going to tell you about mine anyways!

Jon and I met at Pensacola Christian College. He was from Michigan, I was from New Hampshire. We were both freshman, and in our first semester, and actually met within the first month or two of being there. Jon has a story of the first time we met, but I actually don’t remember that time, I remember different time. But I will tell you about both!

Growing up, I was very shy, going to college definitely help change that for me, but it was very slow! After being at college for a few weeks, the school put on what they called, “The Freshmen Extravaganza!” They had pizza and all the freshman would get together at the sports center, and just hang out, play games, and get to know each other. Being shy, I did not want to go, and I do not remember who invited me to go. But I ended up going with a group of friends, most of who I made at work, and they invited their friends and so on, until we had a good-sized group. Well while we were there, we met a bunch of people and my husband says that that is was the first time we met. Sadly, I do not remember meeting him that night. I met so many people it was hard to keep track of! I guess I was unforgettable, because he says that is where we met the very first time. He said he noticed me because I was so pretty, but he didn’t think he would ever have a chance with a girl like me! (HAHA What is that supposed to mean??)

After that, I continued to hang out with the same group, and a girl in the group really liked Jon. She invited him to eat at our table and him and his friends hung out with our group a lot. I didn’t really think anything about it since my friend liked him, and because I was so shy. Well, eventually there came into the discussion about an upcoming event, called a dating outing. It was a chaperoned event that each of the collegians could choose, and this semester it was the girl’s turn to ask a guy to the outing. I had already decided in my mind that I would rather die than walk up to a guy and ask him to the outing, but everyone started asking me if I was going. Somehow it got around the group, and Jon found out. Well, for some reason he thought it his God-given duty to find me a date for this event, even though I wanted nothing to do with it. He was constantly telling me he was going to find the perfect guy for me to go with!

One night, I got my first phone call at college from a boy! It was Jon and he was asking me to go with him on the dating outing!! He knew I was too shy to ask anyone, so he said that he wanted to ask me! I was in shock. I did not really like him in the first place, because he was so outgoing, and had been kind of a “player” always talking to girls and seeing who the next best thing was. So, when he asked I told him no. I don’t think he had ever been given no for answer because he would never let it drop! He would see my across campus and come ask why I wouldn’t go with him, and we also worked at the same place on campus and I would see him there too. Was there no end?? Finally I asked a few people for advice, they said go with him to church, or some other outing and see how it went, if I didn’t like it I would never have to do it again and he would leave me alone.

We decided to go to a required event together called “Vespers.” I was really nervous, and hoping I could get this over with. But the strangest thing happened. I actually enjoyed my time! Since it was just the two of us we got to talk and I got to know him a little bit better. I realized, he wasn’t too bad at all! At the end when he was walking me back to my dorm, he asked me to a Fine Arts event. (Kind of like a prom where you get to dress up really nice in pretty dresses, but no dancing involved.) I had had such a nice time I told him yes, and that was the beginning of our friendship!

This picture is so old, but here we are at our first Fine Arts together! 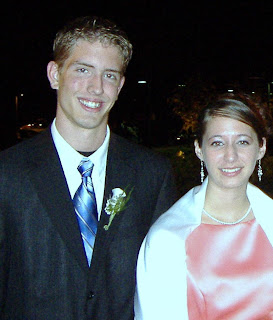 After the Fine Arts and other times we spent together, I finally changed my mind and told him yes, about going with him on the original dating outing. While we were there, he asked me to be his girlfriend, and I of course said yes!A few months later, Jon started acting weird. I wasn’t sure what was up. I look back now and realize he was just nervous! We went as usual one day and ate lunch together, and as I was standing in the line, he gave me a note. It was a long line for lunch and it was a long note, but I had time to read it. I was so shocked because in it, he told me he loved me. I know that is a good thing, but at the time, everything was still so new to me, and I knew in my heart I was not ready to say it back. I was so scared! I go my lunch, found a table and then ended up leaving without telling him. I went back to my room, and yes I cried. I didn’t know what to do or how to handle it, after all this was my first boyfriend. Well after chatting with a friend, and talking to Jon and explaining how I felt on the matter. Everything was worked out. I was glad he had told me, but I was just not there yet.

Over Christmas break, we both had to go our separate ways, but we talked on the phone every night. We talked to our parents and made plans to fly down and stay with his aunt before school started, just a for a day or two. Since she lived near the college she would drive us back. Well we both met at the Atlanta airport and then flew in together to Pensacola. In Atlanta, we exchanged Christmas gifts before we got on the flight together. On the flight he held my hand for the first time. It just so happened we had gotten seat all the way in the back of the flight, so it was kind of quiet. We spent a few days at his aunt’s house, and while there I had my first kiss ever! He had been playing some video games with his cousin, and I had been sitting there watching. Everyone decided that we were going to go out shopping or something, and so his cousin left the room to get get ready, leaving Jon and I alone. Jon looked at me, and somehow I knew he was going to kiss me, and I was so nervous! Well he did, but it happened so fast, I didn’t know what to do. Before I could even think his cousin walked back in and we both pretended like nothing happened!

Back at school, over the long semester we had started to argue quite a bit. I know that a little bit of arguing is normal for couples, but I didn’t know what to do. Other things happened, and for many many reasons which I will not mention here, we ended up breaking up.

This was one of the last events we went to together, before we broke up. 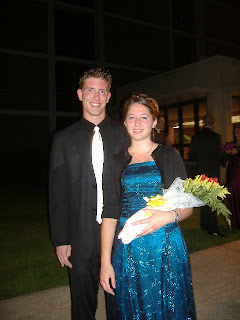 I was the one who broke it off, but I was so heartbroken. I cried and cried. The very next day, I woke up and remembered that we had broke it off. It was then that I realized that I loved him, I really loved him! It was like, not having him anymore made me realize what I had had, and that I really did love him. I was so upset that say I didn’t go to classes, and I used the next few months to take a break and pray about everything. I told Jon that I needed a break, even though he wanted to remain just friends, I just needed time to think and reflect.

About two months later, we started talking again. We still worked at the same place and I saw him often, which was very hard. But one day, I just started talking to him again at work. He took that for an opportunity and called me later. We talked for a long time about everything that had gone wrong, and why we broke up. He wanted to know if there was any chance of us getting back together, and at the time I didn’t know. I told him that I would continue to think and pray about it. It was the end of the semester, so we said goodbye, and I told him I would talk to him after we got back from summer break.

That day, as I flew home, I remember writing in my journal about everything, not knowing what to do, missing him so much, and so wanting to do the right thing in God’s eyes. I did not want to get back together unless I knew it was God’s will. That night, when I got home I decided to call him and tell him I got home safe. We did not talk long but I knew he would want to know because he still cared about me. He was surprised I called but seeing how I took that step, he said he would call me when he got home safe. 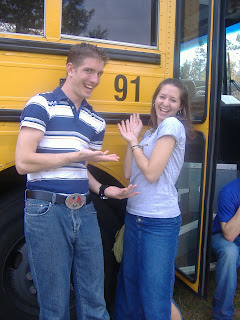 The Christmas after we got back together, 2006. 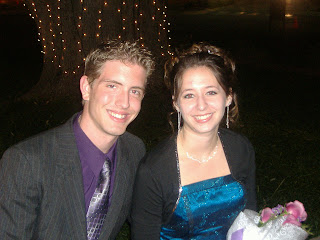 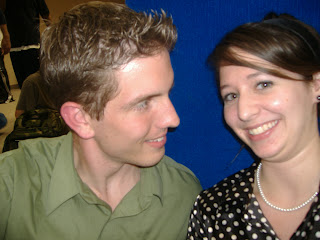 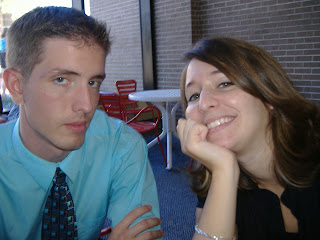 Of course I am sure you are all now wondering how he proposed! Here is the whole story here:
The Proposal