I have already written about our love story, and so I thought that since today marks two years since Jon proposed, I would write about my engagement story! It is actually a funny story, because I was very impatient, and ended up ruining the surprise Jon had for me. We still laugh about today, but I am just glad it happened and we got married!

Jon had been planning for this for awhile now. He had called my manager at work months ahead of time to ask for the day off for the day he planned to ask me. I, of course had no idea. He had it all planned out, he was going to take me horseback riding because it was something I had always wanted to do, and I had never ridden a horse before. Then we were going to stop and have a picnic lunch, and then he was going to propose. Sounds nice, doesn’t it? Well that’s not what happened because I decided to be impatient! Here’s what really happened….

So, the big day was June 5, 2008. It was a normal day like no other. I had gone to work and been home for awhile and was now relaxing. I had known for awhile that Jon planned on proposing to me that summer, I just wasn’t sure when. I was getting impatient because there were so many things I wanted to start doing, like looking for my wedding dress, picking out bridesmaids, and all the other things you do to get ready for a wedding! But I didn’t want to do any of these things without officially getting engaged first. Well that night I found out that my cousins were going to be coming down for a weekend visit, and I knew that would be the perfect time to go look for a wedding gown. I had been mentioning the proposal for weeks now telling Jon that I couldn’t plan anything until he asked me, and then when he heard me talking about my cousins, I think that was the last straw!

Earlier, I had wanted to go on a bike ride, and so right then and there he decided he wanted to go. I knew something had happened because he was in a hurry and acting weird. I got ready and got my bike and we started out. We rode for awhile as the sun was setting and then it happened… he bike “broke”. We stopped to see what was wrong, but because he was acting so weird I had a funny feeling his bike was not really broken. I got off my bike to have a look and he got on his knees right there and proposed! I was a little shocked, but very surprised and happy!

The rest of the night I w 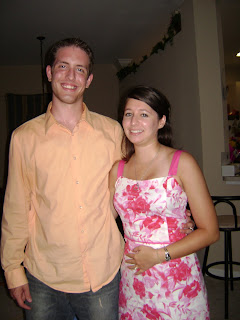 as on cloud nine! We rode our bikes back I showered and got all “prettied up” and then he took me to a very nice, quiet Italian restaurant and a movie. It was a wonderful night! Of course that weekend I went and picked out my wedding dress, and could officially say I was engaged. I feel bad for pushing him so much, when he had it all planned out, but I am still glad for how it happened! If you want to know more about the dates we set read on here.

Shortly after Jon, left for basic training and I was left to do all the wedding planning, but I didn’t mind so much. I was engaged to the man I loved and I was getting married in six months! He is still my best friend and my love, and I am so glad that God gave him to me as my husband!

About the Ring:
In case you were wondering…
The ring was Jon’s grandmother’s engagement ring. She gave it to him to give to me, and I was so thrilled that she wanted me to have it. We got it re-sized and got a wedding band to fit around it, and it is the most perfect ring a girl could ask for!