It has been awhile since I have written in my blog, and even though I have tried several times, I have not been able to come up with the right words that I want to say. It has been a long several months, and I have been kind of angry and bitter in a way with everything that has happened, and I just could not write in here until I got it all worked out with myself.

I am thrilled to pieces that I am pregnant again, and currently I am at 13 weeks and Friday I have my second appointment where I will get to listen to the heart beat! I am so thankful that God has given me another child to carry after he decided to take the first one to be with Him.

So in a way I was very happy when I found out I was pregnant, but at the same I was also very scared. I was scared because I didn’t know if I would miscarry again, and would that would mean. Around that time I also found I had thyroid problems. I was upset because the base doctors had known for 3 months and never said a word about it. I struggled to get an appointment because I knew that something was wrong. I had gained 30 lbs and no matter how much I worked out or tried to eat less, I was still steadily gaining.

After going to doctors and specialists and being pulled around so many times, we have finally got it under control. I am being monitored every month or two when they draw blood, and I have actually lost a few pounds.

The reason why I could not write in my blog, was this was supposed to be an uplifting and encouraging blog. I certainly didn’t feel positive after all this, and I didn’t want to be hypocritical and pretend everything was alright either. I struggled with the weight thing for awhile because very few of my clothes fit anymore, it wasn’t from the pregnancy because I wasn’t that far along enough yet. I think also being scared about miscarrying, trying to be hopeful but yet, still worried, when I wasn’t supposed to be was hard.

One day, after a particular church service that spoke to my heart, I realized that I had been so grumpy about all this for so long that I knew I needed to change. I talked to God about it, and am definitely getting past it all! Now that I am (hopefully) past all the morning sickness, and everything else, I would like to get back to writing in my blog again. There is so much to talk about. About becoming a mother, and all kinds of other things so I am excited!

Thank you all for the continuing comments, I read them, but have not written back yet, but I appreciate every one of them!

Here is a picture from last week at 12 weeks pregnant! 🙂 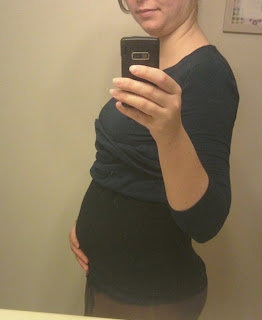