I have a lot of online friends. Some I met through forums, others through blogs, and some through military wife websites. Some of these ladies I have known for several years, and since we are friends on Facebook I have gotten to know them even better. Eventually, I would love to meet each and every one of them in person. I hope to blog about them as they happen. 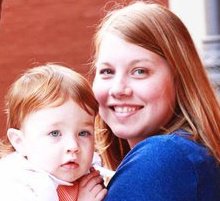 Last weekend I got to meet Mandi Miller from My Perfect Mess and her beautiful family. I first met Mandi in the blog world through another blogger. She had guest posted for someone else (I honestly don’t remember who it was) and I read her post and absolutely loved it! I have been following her blog ever since! Soon after reading that guest post, I contacted her asking if I could post the same one on my blog as a guest post. Her post The Perfect Woman was the first guest blog post on my blog. Later, she guest-posted again while I was on maternity leave. Her post, My Life Before and After Kids was a hit!

In September 2010 we became friends on Facebook. Then this past year we started talking about meeting up. I googled our addresses and I  realized that we didn’t live too far from each other. I figured if we met somewhere in the middle we could hang out for a day. Atlanta was pretty close to being in the middle for both of us, as I live in Georgia and she lives in Alabama. We didn’t want to do anything too expensive, but we also needed to do something that would keep my son, Adam and her two year old daughter, Maddie busy. Mandi again did the research and we decided to meet at Piedmont Park in Atlanta. We talked about a couple dates and then decided on September 10th.

Neither of our husbands were thrilled with the idea of us meeting someone from online that we had never met in person, so they came with us. We left Saturday morning around 9 am and drove into Atlanta (about a 2 hour drive). On the way Mandi and I texted each other trying to figure out when we would arrive and exactly where we were going to meet. Earlier that week, Mandi had researched restaurants that were kid-friendly and cheap and also close by to Piedmont Park. We decided on Moe’s.

As we were texting and calling each other back and forth, Mandi realized that there was an hour time difference between our two states. Neither of us had even considered it! We had left around the same time, but Alabama is an hour behind! She felt really bad, but I thought it was kinda funny. It ended up they were only an hour late, which was not bad at all!

Since we got there an hour earlier we took a bathroom trip, changed Adam and started to walk around the shopping center we had parked at. There was a small pet shop there, so we decided to take Adam in to see if they had any animals. They only had some guinea pigs, bunnies, ferrets, and fish, but Adam seemed to enjoy it! 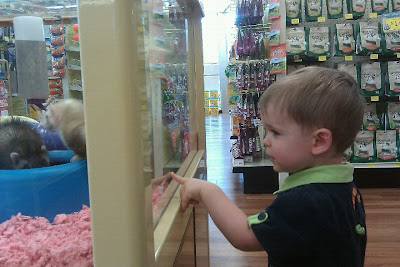 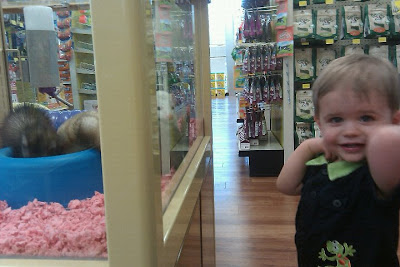 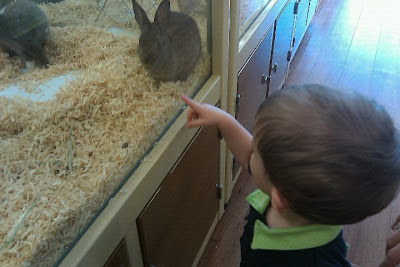 Soon after, Mandi and her family arrived and we ate lunch. Her daughter Maddie was so cute and we enjoyed watching the kids eat and enjoyed talking to each other. The husbands seemed to get along pretty well too! After lunch, we decided to walk down to the park. It wasn’t too far, but we did walk for awhile. We went in through the entrance to the Atlanta Botanical Gardens and it was very beautiful. I wish I had gotten a picture of it, but sadly I didn’t.
The bad thing about the park was that it was so big and none of us had any idea where we were going. We kept walking around, hoping the park would have some kind of map, but we couldn’t find one so we eventually stopped to ask some people where the playground was. We had heard there was a splash pad for the kids, but we never did find it…

Eventually we found the playground, and some shade and we sat and watched Maddie’s daughter play while we talked. Adam had fallen asleep in the stroller much to my relief, as I wasn’t sure if he was going to nap that day at all. We chatted about all kinds of things like we were old friends, and it was just really a beautiful day. Eventually Adam woke up and Jon took him to play on the playground as well.

Soon everyone was hot, so ice cream and water was needed! We enjoyed sitting in the shade, and tried to keep track of the kids. Maddie played some more on the playground and then we decided we needed some pictures. I wish I had taken more, but the ones we got came out really well! 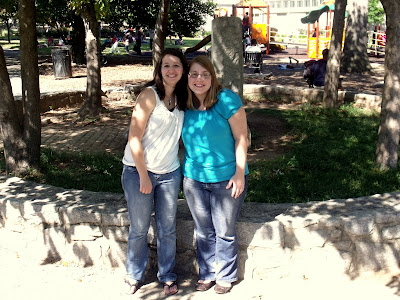 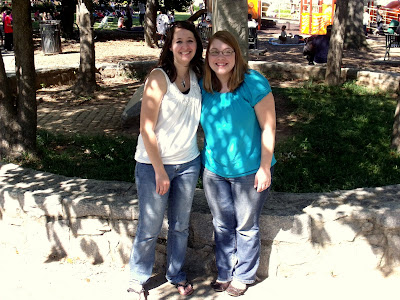 Then we took some pictures of the kids… 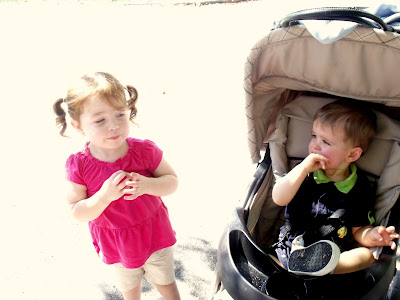 After pictures it was about 4 pm and we decided to call it a day and walk back. We talked for a few more minutes and then said good-bye.

I am sad because at the beginning of 2012 Mandi and her family will be moving to the islands of St. Kitts and Nevis as missionaries for two years. I am not sure if either of us will ever be living close to each other again, since we are military and they are missionaries, but I am sure glad we took the opportunity while we still could! Of course Mandi and I will always still keep up with each other online as well!