I am a little late with this post as Adam is almost 7 and half months now, but better late then never right? A lot happened during the last month, here are a few pictures to show you! 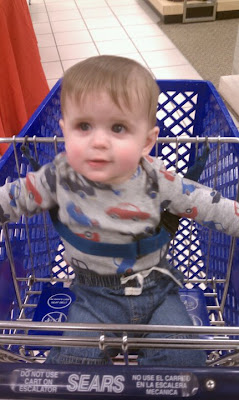 He now can sit in the big boy seat in the cart at the store. Not sure how much he actually likes it though as he was happy for about 5 minutes after this picture then wanted to get out. But it’s nice for me, because now I have more room in the cart to put things! 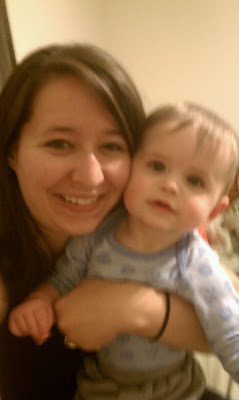 Adam and I. He is not very cuddly too often, but sometimes he will just love on us. 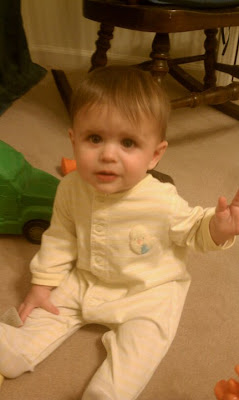 This past month Adam perfected his sitting up. He loves it! I can just set him down and he can play with toys, and he loves being able to do it by himself. 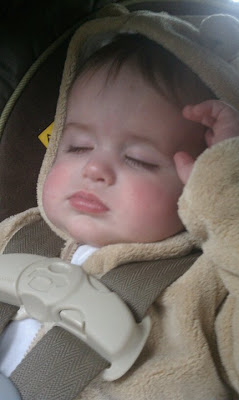 The day after Christmas we went down to Florida for Christmas with my family. It was a 6 hour trip which was the longest Adam had ever been. I was a little worried about it, but it wasn’t too bad! A friend of ours let us borrow a portable DVD player for the car so we set that up, and when he got upset we put on Baby Einstein. He loved it! This picture is how he fell asleep on the way there. 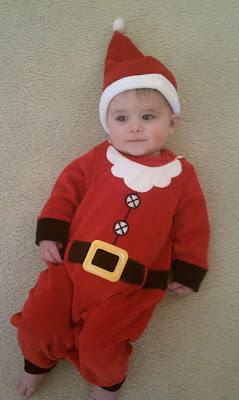 My mom got this little outfit for Adam’s Christmas with my family! 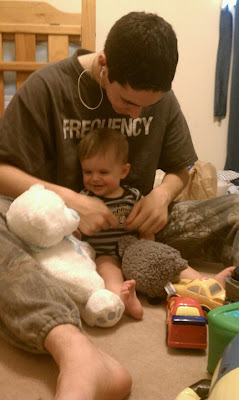 My brother came back with us after Christmas to stay for a month. This is him playing with Adam. They were having quite a fun time! 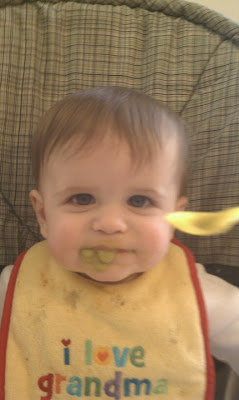 Adam says, “I like peas!” Adam likes all his vegetables, but he does NOT like fruits! It amazes me it really does, and we are working on it, but right now he will gag and shudder if I gave him any kind of fruit. 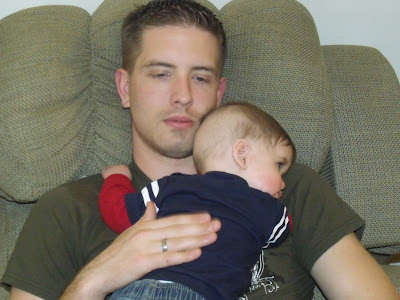 Adam likes to give hugs. For some reason he gives them more to Daddy then to me, but that is ok, it is still cute! He gives kisses too. He leans up against daddy’s cheek, and goes “Mmmph!” It’s really is the cutest thing.

Adam has been sick for the past three weeks now. We have been to the doctor’s at least six times in the past three weeks and who knows how many phone calls in to the nurse that includes. It started out with a rash he had. It started right around the time he tried peas for the first time, so I thought maybe it was the peas. It ended up being so bad his little arms were swollen, so I decided I would take him in the next day.

Well the next morning my husband went to wake him up and found that he had not wet his diaper all night, which was highly unusual. He usually wake up with a soaked diaper, so we ended up going in to the doctor for that and the rash. It ended up being 17 hours total he went without wetting his diaper, but the doctor couldn’t find out why and said if it happens again they would look into it more. Thank God it hasn’t! The rash was eczema, which I didn’t even know what it was until I got home and googled it. I had always thought it meant you just had really dry skin, but I guess it was a little more than that. The doctor said this didn’t mean he would have it the rest of his life it could be just baby eczema. He gave us a prescription of hydrocotizone cream and after about a week, it was gone! I was really shocked at how easy it was! We are still supposed to be using the baby moisturizer on him twice a day, and that has helped as well.

After that, he came down with pink eye in both eyes. He woke up with it one morning and it was pretty bad so I made an appointment and the doctor prescribed some eye drops to be put in both eyes. We did that for about four days and it was gone. A few days later it came back so we started the drops up again. So far so good and it hasn’t come back!

Around the same time he started a cold and cough. Poor kid was so miserable with sneezing and sniffing and coughing. It got so bad he was up literally coughing all night long. He wasn’t getting much sleep, and neither were we. I called the nurse and got all the tips on what to do. We started putting him to sleep in his car seat because the it was propped up and the nurse said that would be the best thing. We put on his little vaporizer for the steam to help him. We had some little baby nose drops the doctor said to use as much as possible because the cold was making stuff drip down his throat which in turn was making him cough. The doctor also had us use the little baby booger sucker that gets everything out of their noses. He hated that, and not even sure if it helped. But it did get some stuff out! We also used baby vick’s vapor rub on his feet with socks on and on his chest to help with the coughing. None of these things seemed to help!

A week into the cough/cold thing, the morning of my birthday I went and got Adam up and he was just burning up. I was shocked at how hot he was and it scared me so bad. His fever was 102.5 and I was going crazy trying to figure out what to do since it was his first fever. Gave him some baby tylenol and got another doctor appointment since he had been coughing for a week and now had a fever. The doctor told us what to do and said we basically had to wait it out. He said if he has a fever for two more days then to bring him in again and they would do a chest x-ray. We used baby motrin and that helped a lot. He did have the fever for two more days, but it had gotten pretty low so we didn’t bring him back in.

The next few days after that his cough started to get worse. He was up every two hours with coughing fits where he just could not stop coughing. We would get him up sit in the bathroom with him and let the steam from the shower run. Then clean out his nose and use the baby nose drops, put vicks on his feet and chest, and put him back down. Three days of that and we were exhausted!

I was determined that two weeks of coughing was ridiculous and so I brought him into the doctor again. They did a chest x-ray (Which was awful! He was all squished up in this little thing, and I just wanted to cry.), but it came back normal. At the same time he was there the doctor checked his ears and found the start of an ear infection. He said the same antibiotics for that would kill whatever else he had as well. Right now he is doing better. He is still waking up 1-2 times a night, but is doing a lot better. Now to keep him that way! Being a mom is so hard. Watching him be sick and knowing you are doing everything you possibly can and there is nothing more. It is hard, but so worth it!