I found the website: http://jennyspouse.com/ awhile ago and have loved reading it and keeping up with the different strips ever since. One night I even went through all the old strips and started reading them to my husband. Him and I were both cracking up by the end of the night, and nodding our heads at some of the familiar scenarios. 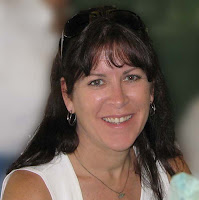 I did some researching and eventually learned that the author of the strips: Julie Negron was stationed at the same base as me! I was very excited and hoped that I would meet her at one of the spouse’s lunches or game nights. Well, last month we had Heartlink at our Airman & Family Readiness Center and Julie was there! I got meet her in person, and she is a sweetheart! After I got home I thought it would be a great idea to ask her to do an interview for my blog, she agreed and here are the questions and answers about her comic strip!


When did you first start writing the “Jenny the Military Spouse Comic Strip?”
I started writing “Jenny” around February 2005.

We had transferred to Okinawa three months earlier and I was looking for something to do with myself. When we left the states in November 2004, I was operating an in-home art studio with little success. Out of frustration, I packed up the whole mess and put it in storage…I didn’t even take a pencil with me. I told my husband I needed a break from illustrating and that I wasn’t going to do any art at all for the entire time we were overseas. This would be an extended vacation. What I didn’t realize was that the passion inside of you will not simply lay still…it has to speak. But my husband knew it. He laughed at me and said, “You won’t be able to go the whole tour without drawing.”

I was a long-time member of the Air Force Crossroads website (http://afcrossroads.com/) and had for years been reading a lot of funny stories from other spouses about their adventures with life in the military. When we landed in Okinawa, I met women face-to-face who told the same stories.

Something happened that I hadn’t planned on…I was inspired!

I remember coming home from a spouses’ meeting one night and telling my husband, “I think I should do a cartoon about life as a military spouse.”

He laughed and said, “But I thought you quit?” He knew all along that I couldn’t deny my passion for drawing.

I told him about the stories I’d been gathering and he agreed that I needed to get this down on paper. He helped me devise the characters, the storyline, and write the ideas that would later turn into actual “Jenny” cartoons. The first comic strip was published in the Stars & Stripes newspaper on November 6, 2005.

Where do your get ideas?
The ideas come from everyday life. My life, my mom’s life as a career AF spouse, my sister-in-law (also a career spouse), and those of other spouses. When I get an idea from somebody else, I always make sure to notate right on the strip “Thanks to xxxx”. I want the actual storyteller to get the credit.

How many newspapers publish your comics?
Right now, there are more than 100 military newspapers and newsletters running “Jenny” comic strips. I used to keep track but I just can’t anymore.

Would you say that you are a lot like Jenny?
I always say that I model Jenny after me and how I would react to a situation. I usually just observe and don’t get aggressive or interfere. She’s a new, young spouse so I think it’s appropriate for her to just watch and learn.

My alter ego comes out in her good friend, Chandra, who tends to say exactly what she thinks. And she’s usually right on! Chandra says the things that I can’t or won’t.

What is your favorite “Jenny the Military Spouse” comic strip?
I can’t really pick one. I like several of the strips and dislike some that I didn’t think I’d explained well enough. Lo and behold, those are usually the ones that get the most positive responses. I guess the readers know where I’m going even when I don’t.

Have you ever written any other comics besides “Jenny the Military Spouse?”
I started my career in cartooning as an editorial cartoonist in Oregon in 1988. I went to commercial art school in the early ’80s and had always wanted to be a cartoonist. I’ve really never liked drawing things in a “realistic” or “fine art” manner, I’d much rather draw them as a cartoon.

Once I had my foot in the door as an editorial cartoonist, I started submitting editorials at every military base I moved to. I mostly submitted humorous columns about life as a military spouse but I took the opportunity to illustrate them and get my artwork out there. I freelanced for years: window painting, ads, training brochures, children’s books that were never published, etc.

I currently have two books on the market which I’ve either illustrated or contributed artwork to. One is “Household Baggage Handlers” by Marna Krajeski, the other is “The Military Father” by Armin Brott.

I’m working on the release of the very first “Jenny” book. It should be available from Lulu.com in time for Christmas orders. The title is “PCSing…it’s a Spouse thing!” There are two more coming…a total of three books are in the works. The final two won’t be available until next year.


Wow I am so excited to get the “Jenny” book now! Now without further ado here are a few comic strips that I liked. Please go to http://jennyspouse.com/ to read more!


“PCSing…it’s a Spouse thing!”
“Jenny follows the adventures of a young Air Force spouse determined to overcome the challenge of a military lifestyle. Drawn from the real lives of both contributors and the cartoonist, Jenny’s experiences reflect the humor, ingenuity, and sheer determination necessary to be successful as the spouse of an active duty military member.”