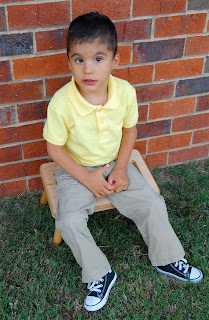 There is a military family stationed at my base that needs your help. They have two children, and one is a very special boy with two very rare chromosome disorders called: 9p minus (also known as Alfi’s Syndrome) and 8q duplication. This little boy’s name is Eddie Davis.

Eddie is a miracle baby, because his mother gave birth to him 11 weeks early. The doctors gave no hope to the Davies family, but they believed that Eddie could continue to survive. Soon after, they found out that Eddie had several holes in his heart and also several rare genetic disorders. He had several surgeries, and one was done at the very young age of 3 months to repair his heart.

His mom, Carolina Davies tells us a little about Eddie’s progress and growth:

“Eddie’s progress was very slow. From 3 months of age until about 8 months, he still acted like a newborn. At 12-14 months, he started sitting up with assistance. By 30-36 months he started to commando crawl and by around 36 months he was crawling like a champ.

Now, at age 4, he does not say any words, but babbles like a baby. He still crawls everywhere but has been pulling himself up to stand, can stand up on his knees, and can take a few steps with the assistance of a walker.”

On October 28, 2010, a new challenge for the Davies family begin. Eddie had 4 seizures in one day! Soon after that he began to have seizures on a weekly basis and he had to have several EEG tests to see what was going on. They found out that Eddie was having generalized seizures and he was then put on another seizure medication to help with that.

After they found about the seizures, Carolina Davies (his mother) decided to look into getting Eddie a Seizure Alert dog. She soon found the perfect place to get one, a website called, 4 Paws for Ability. The website’s motto? “Providing canine miracles for people with disabilities worldwide.” And that is exactly what little Eddie needs: a canine miracle. The total cost for Eddie to get a dog is $22,000, but the Davies family needs to raise $13,000 of that cost before Eddie can get his dog.

So what can you do to help? Read what Carolina Davies (his mother) has to say:

“Besides heart surgeries and seizures, Eddie has had surgery to correct his eyes and surgery to correct another birth defect. Eddies goes to physical and occupation therapy once a week and attends special needs Pre-K four times a week. At school, Eddie has been making a lot of progress and his teachers have been very impressed.

Despite the incredible gains Eddie has made, we have made relatively little progress in his ability to walk, stay focused, and his seizure disorder. Thus, we think the addition of a service dog from 4 Paws for Ability (a nonprofit agency that trains service dogs for people with disabilities) would help him in a number of ways.

I ‘ran into’ 4 Paws for Ability while doing my online searches. I liked them because they don’t put a restriction on the persons ability to handle a dog. Meaning, I will be the dog’s primary handler, not Eddie. They also don’t have an age restriction, most places want the child to be at least 8-12 years old.

They have accepted Eddie into their program and will be training a multi-purpose service dog for seizure response, mobility, and behavior disruption. This dog will be trained especially for his needs. We are also in the process of adding my daughter, Elisabeth to the contract because she has type 1 diabetes so the dog will also be trained in diabetes alert as well. By supporting 4 Paws for Ability, you will be giving Eddie a constant, trusted companion that will be able to help Eddie focus, help him walk, and help detect his seizures before they happen. You can help us with this miracle… this missing piece to Eddie’s long term goals and development.

Eddie’s story and donations via paypal on 4 Paws for Ability link: http://www.4pawsforability.org/dream.html#EddieDavies
(Please make sure to type “In honor of Eddie Davies” in the special instructions box before checking out via paypal.)

Eddie in The Sun News:
http://www.macon.com/2011/06/22/1603516/family-raises-money-for-service.html
This cause will also be featured for the next month in my ads section.